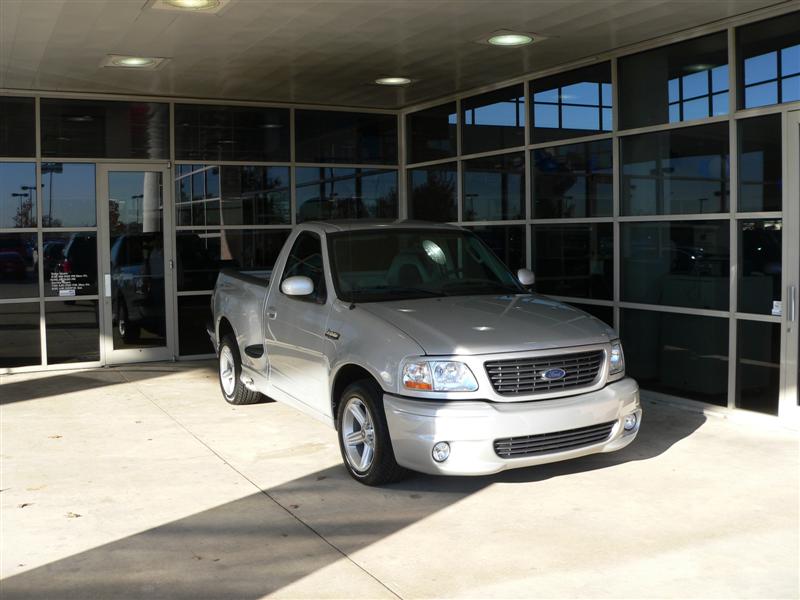 Picking up the 2004 Truck at Bankston Ford -
Note: The quality of customer service has fallen to zero at Bankston.
Even a letter to the General Manager was ignored... Details of delivery issues

Picking Up First Lightning at Dealer on 2/28/00

Here is a shot from a slower car... LOL

On 10/25/2000 or so I noticed the Intercooler reservoir is about 1/2 inch lower than where I marked it 4 months ago.  Seems like 11k miles is a common number for intercooler leaks based on post in the Lightning Forum on F150 Online.

Around the End of the year I had the intercooler replaced.....

On Saturday 10/21/00  I had a sound system upgrade done at Earmark Car Audio.  I replaced the front 5x7's with Boston Acoustics Components and the rears with Boston Acoustics 5x7's.  Earmark Car Audio made a custom enclosure for a single JL Audio 10" Sub to go behind the drivers seat.  They put a huge Alpine V12 amp between the Sub and the Stock CD changer.  These additions should make it easier to hear the CD's while screaming down the radio at WOT with the windows down.

Now I just need to figure out what Crossover, Hi pass, Low pass,  filter, and Gain all mean so I can tweak the amp.  It sounds great at half volume but not so good at lower volumes.  I need to dial down the amp so it kicks in at lower freq and lower the gain a bit as well I think.

I decided to check and try to replace the plugs the other day....

Pictures of Fun With Sparkplugs

The Purple color is from Octane Boost - Broken Electrodes were Splitfires

As you can see by the sticker I bought the Lightning at Lee Jarmon Ford but their service is very poor so I don't take it there anymore.  I have heard good things about Bankston Ford in Frisco and they have treated me pretty good so far

More pictures from the day I picked up the Lightning

Thought I would have some fun with the photographer.

Needless to say I am grinning from ear to ear. !!!

On Way to Strip.

Link to the New Wheels and Tires I recently bought.
I am running the chrome wheels on the street tires now

Modifications made to My Lightning....

There are LOTS more pictures elsewhere on SVTLightnings.com and On the TALONClub.com site